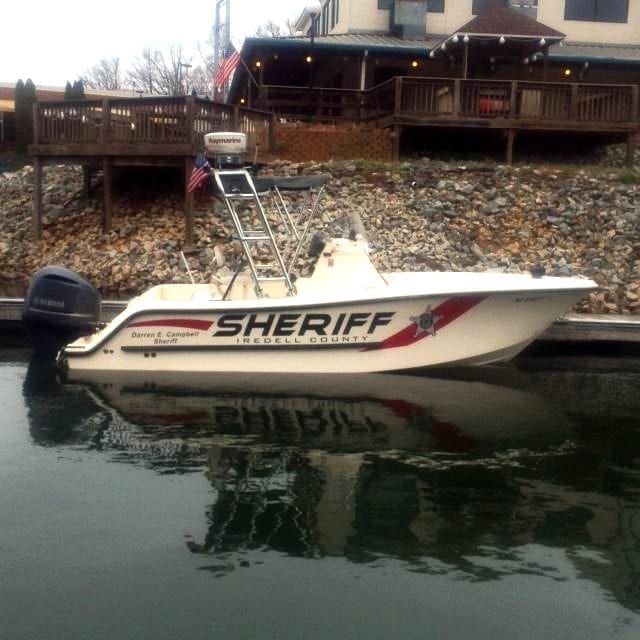 “It’s embarrassing to say, but there was no enforcement in the early days on the 535 miles of Lake Norman Real Estate Shoreline when all this started,” says Officer Scott Howard of the Charlotte-Mecklenburg Lake Enforcement Unit. “Of the 4 counties on Lake Norman, we were the first to put a lake patrol on the water in 1981, and this is our 25th anniversary year.”

Howard should know. He grew up here, and proudly says “the lake is as old as I am.” Also, he boasts 20 years of police experience, the majority of it patrolling the lakes. So, although he isn’t an original member, he was around for some of the ‘old days.’ And, he is quick to correct you if you call it ‘lake patrol.’ “Enforcement. We are Lake Enforcement,” he reminds, in the no-nonsense tone you can just imagine writing you a ticket

In the 1980s, when the population was a fraction of what it is today, it was the Lake Patrol. It existed to help stranded boaters, tow people when their boats broke down, and sometimes just check on people.

“There was an older woman who lived on a cove out on Meck Neck,” says retired officer Bud Williams. “She’d see our boat coming and start putting out the cookies and milk. We helped an old man move the TV in his house, and another gentleman who just had heart surgery, we shoveled the snow out of his driveway,” Williams chuckles.

“There are a million stories,” says Officer Howard. “The patrol knew everybody. There was even one old gentleman who could whistle, and fish would come right to his dock and he’d feed them bread! It was a different world then.”

Another of the original members of the Lake Patrol is Harry Garrison, retired now, and living in Mint Hill. He remembers duty on the lake with fondness. Though he cautiously says he “liked the lake when it wasn’t quite so developed.” He is glad not to have to be chasing down scofflaws like the officers of today.

In the early days of the 1980s, Vick Orr, a Mecklenburg County Police Chief became the unit’s first Captain and patrolled all three lakes. “On Wylie, the Lake Patrol had an old tri-hull with an old Chevy engine,” says Officer Howard. “I remember trying to chase someone in that thing!” he chuckles.

On Lake Norman, a boathouse wasn’t completed until 1982. Howard says officers had to trailer the patrol boat up from the Charlotte County Garage every day that year.

Thank goodness they got their boathouse because things really changed in the 1990s with the increasing population. “Taxpayers complained about response time, especially in the Meck Neck area, which tended to be isolated,” says Howard. “You have to keep in mind that most of the waterfront in the mid-nineties was still unincorporated.”

“Sergeant Tom Burnette, who is retiring next August, really spearheaded changing our title and focus to Lake Enforcement,” says Howard. “He has emphasized getting all kinds of training for us so that we can deal with any situation.”

Prominently in a long list of training, officers must attend the long Coast Guard Auxiliary course; they must be certified EMTs who go on calls once a month and have continuing re-education in life-saving techniques, and they must be certified in swift water rescue. Naturally, boating experience and excellent swimming ability (yes, there is another test) are a requirement for the job.

Howard says one of the Lake Norman unit’s consistent accomplishments is keeping equipment so ship-shape that they kept their first patrol boat for 16 years, finally replacing it in 1997. Now they have two additional auxiliary boats and two jet skis, along with a citizens-on-patrol boat manned by civilians.

It can get pretty hot on the lake in summer, and uniforms didn’t always match the conditions. Howard says in the early 80’s “officers wore the full PD uniform, even the wool blend pants, with a uniform shirt, badge, and name tag. No shorts! It wasn’t considered professional enough,” he says.

They progressed to gray work pants and a golf shirt. “Then by the mid-’90s, we said, ‘We’d like to get some shorts with those golf shirts!’ Our first shorts were cotton, and they would never dry,” he says.

“We’ve taken a 360-degree turn from the early days,” says Howard. “But the biggest change is our enforcement activity and the amount of training we get.”

In his opinion, the more education boaters get, the better. “The kids are not the problem. It’s the adults,” says Howard. “They often don’t have a clue what the markers mean. The attitude is, ‘where there’s water, I can drive.’ Not!”

He says boaters often drive right up on a shoal with the marker right in front of them, ripping the bottom out of an expensive boat, just simply because they don’t know what the signage means and haven’t bothered to learn.

“’ Shoal’ means ‘there’s a shoal right here’, and you can’t be going between the marker and the land.” Howard shakes his head.

Lake Enforcement says according to national statistics 70% of all boat accident victims have no formal boating education. And on routine boat checks, when officers check for safety equipment, like a fire extinguisher and personal flotation devices, they find that more than 90% of weekend boaters do not live on the lake. “That makes for some scary situations, just because they haven’t bothered to educate themselves,” he says.

“It’s irresponsible. Irresponsible and lazy can kill you or someone else,” Howard observes.

He believes boaters should be licensed, just like drivers, with a safety course required. He wishes that legislators in Raleigh would take lake boating as seriously as they do the ocean-going craft.

Sgt. Burnette, whose tenure has seen not only a change of name and focus but the training, the uniforms and the boat to go with it, says he’s proud of his unit’s community outreach.

“We’re continually looking for ways to improve and develop partnerships with the Lake Norman community,” says Burnette. An example is their Red Cross Water Safety Program for 3rd graders, called Whale Tales. They teach water safety in 3 schools now. Kids get a ‘Junior Officer’ sticker at ‘graduation’ along with water safety workbooks.

“We’re dedicated to providing the best training and equipment on the lake,” says Burnette.