I had not thought about those spoons or of her funny insistence one day that I take a couple home with me. “Bec”, she said in her knowing-better-than-you way, “You really should have a couple of these to use at home, you have no idea how perfect they are for so many things.” I remember that I reluctantly took a couple. I must admit, more to shut her up than my actual want of more cutlery to find a place for in my already filled-to-capacity kitchen drawers. 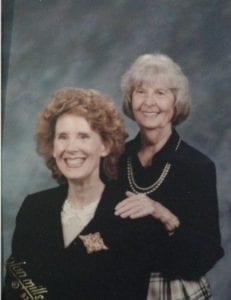 I hated to admit that she was right. There was something just right about those spoons. I thought it might be the weight, or the fact that they felt so smooth, I even liked the shape. And I did find myself reaching for them more often than I had thought I would; knowing full well that she would be smug about my agreeing with her that they might just be perfect spoons.

My Mom was a top notch cook. She never read a recipe that intimidated her. Sitting with her cooking magazines, or a new cookbook that she might have found or was given was pure delectable bliss. She could deduce from a list of ingredients just how something was going to taste before she even had her pans out. She used cooking as her therapy. When she was in a good place she made multi step confections or exotic recipes from far away places that required special spices and hard-to-find ingredients. When she was upset, angry or sad, she usually made fudge. My sister and I have memories of her standing at the stove, jaw clenched, stirring furiously and answering, if we dared ask, that she was making FUDGE! The way she said it, we knew that this fudge was not a treat, sweet as it may have tasted. To this day neither of us likes fudge!

After her death I was given the awesome task of sorting out my Mom’s life collection of things, both practical and sentimental. In doing so, I came across the spoons. I looked at them as I never had before. I saw them as a metaphor for so many of life’s experiences. There among the many other assorted utensils, the spoons seemed to have a life of their own. They suddenly took on a whole new meaning for me. I thought about my Mom and how many nourishing things she made and served with those spoons. I thought about the things that “stirred” her passions and despair. I realized that the first solid food she ever gave me had been with a spoon and paradoxically the last thing I fed her before she died was coffee ice cream – in a spoon.

I began to analyze my own life in relation to those spoons. I thought about who nourished me, who stirred my emotions, who I could nestle beside when I was alone or afraid. I began to think about the fact that the spoons had been a “set,” but still completely functional when separated and usually were used independently. I examined them and found scratches, wear marks and signs that they definitely had age and use. Standing in my Mom’s kitchen I saw what she had seen in them and I appreciated them truly for the first time. Their imperfections made them perfect, just as she had said.

They were better than sterling, those sets used only for company or special occasions. They served everyday life, sampled whatever was put before them, handled whatever hot water they were submerged in, and found a way to smooth the toughest batter, or tenderly scoop the most fragile. And I saw how these spoons were like my best girlfriends.
For there on the counter I saw them as a metaphor for friendship. They represented nourishment, comfort, practical help, and life’s beginnings and endings. They served and they nestled against one another in a predictable way as if to say “grab hold, you can count on me.”

And so I have. My girlfriends have seen me through boiling, curdling, weeping and scrapings in my lifetime and still they cradle and nestle against me when I feel so alone and useless. My Mom tried to tell me how perfect those spoons were, of course she was right. I hate it that she knew all along I’d see my best girlfriends in her spoon fed wisdom.