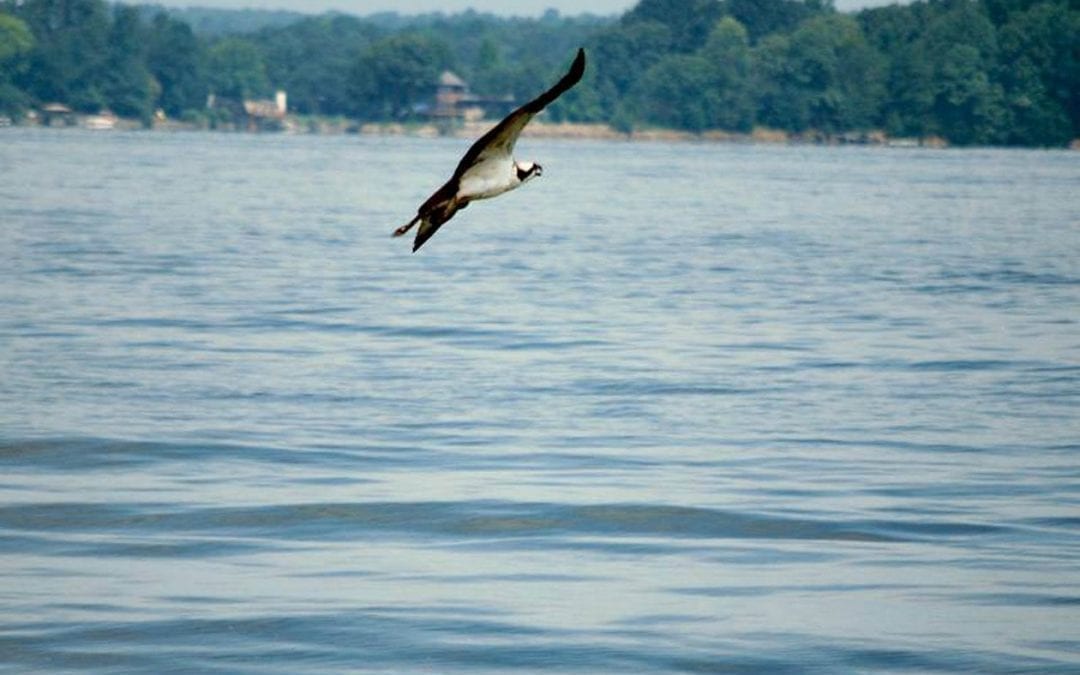 Their uninvited guests were back.

Summer ‘08 marked the 4th year their visitors had dropped a scraggly pile of sticks onto the deck of their pontoon boat. They were not only living in it but laying their eggs there. Out of respect for Lake Norman’s fish hawk, the osprey, retirees, John, and Jan of Mooresville knew they wouldn’t be using their boat – again.

Typically, osprey raises one small brood a year, taking around 59 days to keep their young liberally supplied with fish. Then, they teach them to fly, before the long trip to Central America or Florida for the winter. They’re usually back in early spring.

John and Jan were introduced to the growing population of osprey over 15 years ago with just a handful of chicks.  “The first year the osprey came and built a nest on the boat would have been ’05,” recalls Jan. “That year, the eggs rolled off the boat. The second year, a hail storm destroyed the eggs. The third-year something got in the nest and ate them. So this year, we called Mark Lancaster, owner of Lancaster Dock & Dredge. He came to our house and put up a pole and platform nest offshore,” says Jan. 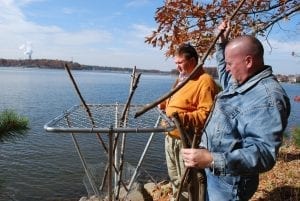 Lancaster is part of a group of volunteers who make osprey nests out of steel with chicken wire baskets, stuffed with ‘starter’ sticks. Lancaster’s job is to drive the piling into the lake bottom, at least 20 feet off the water, to mimic a dead tree. The water acts as protection from predators.

“It’s important for people not to just go out and build an osprey nest,” says Tim Gestwicki of the NC Wildlife Federation. “Sites are vetted by biologists and Duke. It’s a scientific process that is carefully regulated,” he explains. One that is jointly run by the NC Wildlife Federation, along with its local chapter, Lake Norman Wildlife Conservationists. The osprey project is staffed by volunteers and assisted by a funding grant from Catawba Habitat Enhancement.  Though sponsors are always welcome to help pay for an osprey nest as well as volunteers to make them. “We always need people who will monitor the platforms opposite their homes. We gather data that way,” adds Tim. “We’re trying to keep ospreys from building on people’s boats, on channel markers or on Duke Power lines,” says Mark.

Lancaster says volunteering is his way of giving back to a lake that’s given him so much pleasure over the years. “I’ve put in 11 nests total, starting with 5 about 3 years ago. I’ll put out 5 more in March,” he says. “We started out with just a wood platform with a box on it.  Now, we have this steel design that holds up better.”

“The ospreys recognize the ‘look’ of the nest we make,” says Steve Turley.  He’s an architectural designer and past-president of the LKN Homebuilders Association, who volunteers making the nests. “Then, they just fly over and drop sticks and hope they lodge. We learned we have to ‘seed’ the nests with large sticks jammed into the chicken wire, so the birds can recognize it as a nest,” he says.

Lancaster and volunteers were able to move the couple’s osprey nest this summer from the boat to the new ‘seeded’ nest platform. They had to be especially careful of the eggs inside. “We covered them good with pine straw, put on gloves, and moved them that way,” says Jan. “Next morning, the female came back and apparently laid 2 more eggs. Soon we could see 4 babies – and 3 of the 4 lived and learned to fly,” she says.

John says the male osprey seems to have gotten used to having human observers who watch respectfully. He says the osprey seems to call out to him – or squawk out – every time he’s gotten a particularly good catch.

“I tell John to be nice to them because they catch a lot more fish then he does,” Jan says with a smile. John doesn’t seem to need encouragement.  If he doesn’t come out of the house to see the male’s catch, the osprey squawks loudly until he does.

Gestwicki points out that development has decreased habitat for wildlife. So, to see a species thrive is a positive sign in several ways.

“Ospreys eat raw fish,” he says. “If you have enough healthy fish for the osprey, it means the water is healthy. It’s important for the overall health of the eco-system – for birds and humans. 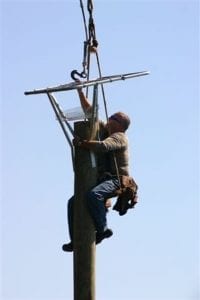 Do not attempt to place a nest yourself. The process is carefully vetted by scientists.
Be a volunteer instead!
Or do you want to sponsor an osprey, or monitor a nest site opposite your home? 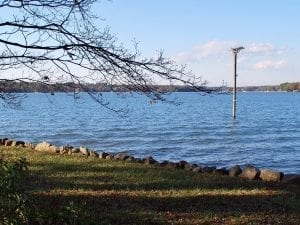 If you see an osprey nest with birds on it:
Ospreys are fairly tolerant but will get agitated if you are too close or stay too long.
Stay 100 ft away or more; don’t motor close to the platform.
Use a zoom lens for photographing.
Do not try to feed them.
Only watch for a few minutes so as not to disturb them.

NOTE: EarthCam and the North Carolina Wildlife Federation (NCWF) are bringing visitors a unique birds-eye-view of an osprey nest in Mooresville, NC. Located on Lake Norman, watch as these fish hawks hunt for food and prepare their nest for the arrival of some baby chicks! Click for Cam