Pizza – Did You Know 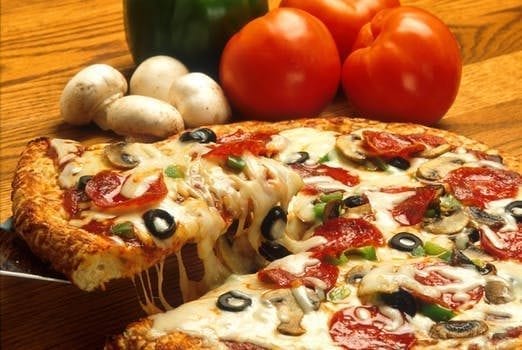 LOVE PIZZA? GET TO KNOW MORE ABOUT PIZZAS or THE IMPORTANCE OF PIZZAS AND WHY THEY ARE POPULAR

A Pizza is a flatbread which is generally oven based and is often served with cheese and tomato source.

The early Greeks often used cheese, herbs and oils to cover their bread. Placenta cake was however developed by Romans through using bay leaves flavored cheese and honey to top a sheet of dough.

The history of modern Pizzas could, however, be traced to the city of Naples in Italy during the early 19th century. Initially, basil, salt, lard, cheese and garlic were used to cover flatbread. The first use of tomatoes, however, is not known as they are a lot of conflicting claims.

The Italian immigrants were the group of people who brought Pizza to the United States of America. This led to the opening of US first Pizzeria known as Lombardi’s. The pizzeria was opened in 1905 and since then the consumption and popularity of Pizza continued to grow that it is believed that pizza is consumed every day by about 13 percent of the population in the United States of America.

While the early Greeks prepared Pizzas by cooking their flatbreads on hot stones and using vegetation, fruits and nuts to cover it, ovens are majorly used to bake modern Pizzas. Brick or stone ovens are popularly used in order to get a traditional experience. This is also to make sure that the pizzas are well cooked. Ordinary kitchen ovens can, however, be used to bake a pizza. It is also possible to cook your pizza on a grill outdoor if you do not want to install a brick oven and still want the traditional experience.

WHY PIZZAS ARE SO POPULAR

After the World War II, the popularity and consumption of pizzas have increased as research has revealed that pizza is being eaten at least once a weak by 41 percent of Americans. The popularity of pizzas could be linked to a lot of things starting with its taste. Pizzas have a delicious taste which is a factor that is directly linked to why people eat. After the need to eat for survival, the next reason why people eat is for the taste. It is therefore normal that any food with a delicious taste would be consumed by a lot of people. Furthermore, it is also a balanced diet as it has all the major minerals including vegetables, meat, bread and dairy amongst others.

The toppings could also be made in series of creative designs such as the Pizza Margherita which was named after Queen Marherita. When the queen visited the Royal Palace of Capodimonte, 3 different pizzas were made in her honor, she, however, preferred the pizza swathed in the colors of the Italian flag. The mozzarella was used to design the white on the flag, basil for the green and tomato for the red color.

New York style Pizza is hand tossed thin crust, firm along its edge yet easily folded to eat. It originated in the early 1990s in New York, NY and is very popular in the Northeast US especially New York, New Jersey and Connecticut.

How to recognize New York style pizza: hand-tossed, thin crust, a thin coating of tomato sauce, and real mozzarella cheese.  Most popular size is the 18-inch diameter cut into a minimum of 8 slices. The fold-ability makes it a great snack food for those on the go.

The high gluten bread flour crust and maybe the minerals in the New York City water give it that distinctive taste.  Some out of town pizzerias even transport the water cross county for the authentic taste.