Lake Norman is an “inland sea” with a surface area of approximately 32,500 acres. It was named after former Duke Power president Norman Cocke, Lake Norman is the controlling lake in the Catawba Basin and is almost as large as the other ten lakes combined.

The Great River was named after the people who lived by it, the Catawba Indians, known in their own language as the Kawahcatawbas, the people of the river.&quot; As the settlers began moving into the fertile lands along the Catawba, they brought with them diseases from Europe that the Catawbas had no resistance to, and in less than 175 years, their population dwindled from over 5,000 to less than 400. 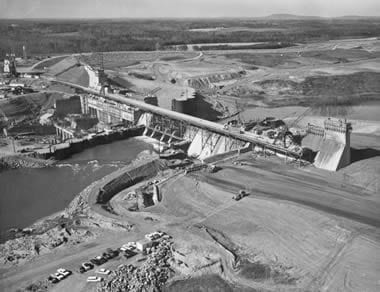 These settlers built their cabins and farmed the land beside the Catawba River, but before long they were drawn into battle against the British Crown. In 1781, General Cornwallis proclaimed to be a damned hornet’s nest of rebellion. At the battle site at Cowan’s Ford, General William Lee Davidson, along with a band of Catawba farmers were able to slow the advance of General Cornwallis. Early in the battle, General Davidson was shot and killed at the river bank. A monument honoring Davidson is located near the present site of Cowan’s Ford Dam, but the exact location of his demise is under the waters of Lake Norman.

After the United States became an independent nation and the Civil War left the people demoralized in spirit, the people along the Catawba were simply existing. Ambitious James B. Buck & Duke, president of the American Tobacco Company, saw a future in the textile industry in the Carolinas, using the waters of the Catawba to generate the power needed to provide clothing for a growing nation. Buck and his brother, Ben, set out to learn everything they could about hydroelectric power. Dr. W. Gill Wylie, who had already experimented with hydroelectric power in South Carolina with his Catawba Power Company, soon began discussions with the Duke Brothers while tending to their illnesses. Wylie introduced the Dukes to William S. Lee, a brilliant young engineer who was designing the Catawba Power Company’s dams and power plants. Wylie needed funding, and Duke needed power. Duke, Lee, and Wylie were looking at the larger picture. Electricity would attract business and industry to the region.

The Southern Power Company was formed, and William S. Lee’s dream of transforming an entire river valley into a hydroelectric system was coming true. In 1927, the Southern Power Company became the Duke Power Company, and by 1928, ten dams were completed with a dozen powerhouses, making the Catawba the world’s most electrified river. William Lee’s grandson, Bill Lee III, had the honor of designing and completing the one final dam which would be the largest undertaking of all, creating not only the largest lake in the Duke Power system but the largest lake in the Carolinas. Homes, family farms, and entire towns would end up under water. The village of Long Island, once a bustling river town with three textile mills, would be completely submerged. Some landowners refused to sell their land but traded it for land along the future lake. Those who kept it long enough did very well indeed. The groundbreaking took place on September 28, 1959. It took four years to finish the huge dam, and another two years to fill the lake. Named after retired Duke Power President, Norman Atwater Cocke, people predicted Lake Norman to be an inland sea. It is 34 miles long and eight miles across at its widest point. Its surface area of 32,500 acres has 520 miles of shoreline. Lake Norman is 760 feet above sea level, 130 feet deep at its deepest point, and holds 3.4 trillion gallons.

There are three generating plants on Lake Norman: Cowan’s Ford, the original power station; Marshall Steam Station, a coal-burning steam-electric generating station on NC 150; and the William B. McGuire Nuclear Station near the east abutment of Cowan’s Ford Dam.

Those who call Lake Norman the biggest thing to happen on a river since the flood of 1916 appreciates its contribution to flood control. Because the lake can handle enormous amounts of water flowing down from the mountains, the torrential rains of 1940 and 1970 did not create a terrorizing replay of the flood of 1916 which took lives, farms, homes, animals, crops, bridges and roads, and destroyed businesses that were never rebuilt.

The cities of Charlotte and Mooresville rely on Lake Norman for their dependable water supply. Duke’s professional foresters manage the quality of the water, plant nearly 1.8 million new trees on the land each year, stock the lake with fish, and regularly spray the shoreline with non-chemical light oil solution to control mosquitoes. A 2,135-acre water refuge was built below Cowan’s Ford Dam to shelter migratory ducks and geese in the winter. Duke Power provided 10 public access areas around the lake as well as 1,300 acres for Duke Power State Park.

There was a time when people stood on highways around the lake offering lake lots for sale for $1,000. There weren’t many takers back then. With the completion of I-77, the entire lake became more accessible to urban centers to the south and north. Slowly, development began creeping north to the part of the lake that had always been agricultural. Today in four counties that surround the lake, there are more than 25,000 residents who like calling Lake Norman home.

What is buried under Lake Norman.